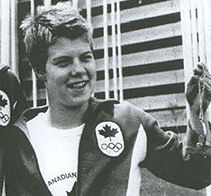 Being the second youngest in a swimming family of eight children meant Becky Smith’s early life revolved around the water. As a four-year-old she would join mother Gwen and father Don at the pool when they volunteer coached. “Mom and dad couldn’t afford a babysitter,’’ Smith said. “We came to the pool, sat on a bench and watched. We finally got in the water. “By the time I was six I had my first swim meet. By the time I was eight I was swimming 11 practices a week plus doing weights every day.’’

Smith’s dedication allowed her to win Olympic and Commonwealth Games medals. It also resulted in her being inducted into Swimming Canada’s Circle of Excellence. Growing up the biggest influence on Smith was older brother George. He competed at the 1968 Olympics in Mexico, finishing fifth in the 400m individual medley.
At the 1974 Commonwealth Games in Christchurch, New Zealand, Smith would win silver medals in the 200 IM and 400 IM and gold in the 4x100m free relay.

Smith was just 17 when she competed at the 1976 Montreal Olympics and won bronze medals in the 400 IM and the 4x100m free relay. But what should have been one of the biggest thrills of her life came at a time of personal sorrow. Her father Don, who was battling cancer, couldn’t attend the Games and was forced to watch on television. “It was quite hard,’’ said Smith. “We weren’t sure how long he would make it. “I had mixed feelings. I was excited but sad at the same time.’’ Her father died soon after the Olympics ended. “My mom and dad gave so much as parents of eight kids that swam,’’ Smith said. “Their whole life revolved around us.’’

At the 1978 Commonwealth Games, held in her hometown of Edmonton, Smith won silver in the 400 IM and bronze in the 200 IM. She did it swimming in the pool named after her father but without the special encouragement he always gave her before a race. “My name is Rebecca Gwendolyn,’’ Smith said. “When I would climb on the blocks my dad would always yell ‘go little R.G.’ That was the confidence builder I needed and I missed that when my father passed away.

Smith competed at the 1978 World Championships. She made two finals but bothered by a shoulder injury, didn’t reach the podium. She retired after Worlds. She is married to a retired principal, Bruce Wiber and has a son Davis, who is following in his parent’s footsteps by pursuing a career in education. Becky has been teaching for thirty years in Edmonton.