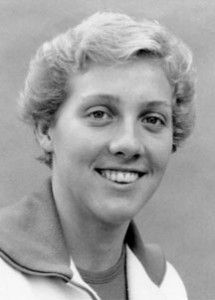 Born in Edmonton on July 28, 1959, Cheryl Gibson emerged in 1974 when she broke the Alberta Provincial record in the 800-metre freestyle and qualified for her first national championships. One year later, she won her first Canadian title in the 400-m individual medley in style by becoming the first woman in the Western world to break the 5-minute barrier with a time of 4:58.66.

A medley, butterfly and backstroke swimmer, Gibson’s career on the national team spanned from 1974-1982. Her first major international competition was in 1975 at the World Aquatic Championships in Cali, Colombia. This was followed shortly thereafter by the 1975 Pan American Games in Mexico City where she won two silver and two bronze medals.

It was in 1976 at the Montreal Olympic Games that Gibson swam her “perfect race” in the 400 IM. She shaved 10 seconds off her personal best time, and went under the previous world record time, to win the silver medal. The gold medal went to a member of the controversial East German team.

In 1978, Cheryl won gold in the 200-m backstroke and two bronze medals at the Commonwealth Games in Edmonton and then went on to win bronze medals in the 100 and 200 backstroke at the 1978 World Aquatic Championships in Berlin, West Germany. In 1979, Cheryl competed at the Pan American Games in San Juan, Puerto Rico and came home with three silver medals in the 100 and 200 backstroke, as well as the 4×100 medley relay. At the 1982 Commonwealth Games in Brisbane, Australia, Cheryl was a golden girl once again, claiming gold and silver medals at those games.

Cheryl has given back to the sporting community by staying involved in numerous activities. She was a member of the 1996 Sponsor Committee for the World Figure Skating Championships, Co-chair of the Edmonton World Cup Series in 1998 and 1999, Co-chair of the Edmonton bid for the 1999 World Short Course Swimming Championships, Vice-chair of the organizing committee for the 2002 COA Olympic Congress, and has served on the boards of Swimming Canada and the United Way of the Alberta Capital Region..

Cheryl attended Arizona State University on a swimming scholarship and graduated in 1982 with a Bachelor of Science degree. She went on to obtain her Chartered Accountant designation in 1986 and then her law degree from the University of Toronto in 1989. In 2002 she was awarded the designation of a Fellow of the Chartered Accountants. Cheryl is currently a tax partner with an national law firm, Fraser Milner Casgrain LLP. She and her husband Ralph reside in Edmonton and have two children: son Andrew and daughter Lindsay.