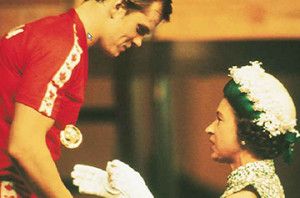 When he was 12 years old Graham Smith travelled to Edinburgh, Scotland, to watch the 1970 Commonwealth Games. It was very much a family affair. His brother George and sisters Susan and Sandra competed as swimmers. Mother Gwen was a team chaperone and father Don helped on the pool deck.

Walking around the athlete’s village one day Smith saw a sign for the 1974 Games in Christchurch, New Zealand.
“I thought that’s something to shoot for as a goal,’’ Smith remembers.

That started Smith down a path that would see him win both Olympic and Commonwealth Games medals and set two world records. It also led to the Edmonton native being inducted into Swimming Canada’s Circle of Excellence.

Smith failed to qualify for the team that competed in New Zealand, but wrote his name in the record books at the 1978 Commonwealth Games in his hometown.

Fifteen days later at the World Championships in West Berlin Smith won the 200 IM and set a world record. He did it beating three other world record holders in the field.

“The fight to even get into the final was incredible,’’ Smith said. “It was the best there was at the time standing on the blocks.’’

Smith competed at the 1976 Summer Olympics in Montreal but came away with mixed feelings. He was part of the 4 x 100m medley relay team that won silver but missed two bronze medals by fractions of a second.

“It was bittersweet,” Smith said. “I was a bit frustrated. I think I could have done better.’’ Smith’s father Don was battling cancer and couldn’t attend the Games. He died shortly after the Olympics ended.

About a year before the Edmonton Commonwealth Games Smith and his coach began studying the schedule. That’s when Smith realized he had the chance to do something special.

“We kept it to ourselves there was the possibility I could win six gold medals,’’ Smith said. “We didn’t tell anybody about that goal. That was one of the burning desires.’’

Smith was a member of the Canadian Team that didn’t compete at the 1980 Moscow Olympics because of the boycott. He retired in the spring of 1982.

During his career Smith won 56 gold, 23 silver and eight bronze medals in Commonwealth, Olympic, World Championships and National events plus set 17 Canadian records. He won both the Lou Marsh Trophy and Lionel Conacher Award as the Canadian Press Athlete of the Year in 1978.

Smith is credited to be the first Canadian Swimmer to have a Maple Leaf tattoo. After his first long course World Record in 1977, Graham had a Maple Leaf proudly tattooed on his chest. He did this to display his fierce national pride of representing Canada internationally. Other national team members followed his lead and helped build the tradition; Bill Sawchuk, Chris Erikson, Alex Bauman and Victor Davis to name a few from that era of Canadian Swimming.

Graham lives in Tsawwassen, B.C. with his wife Lynn Ann and their two sons Cameron and Garrett.