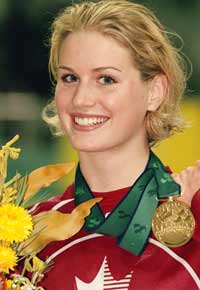 Jessica Sloan delivered one of Canada’s greatest Paralympic performances at the 2000 Games in Sydney. At the time 18, Sloan earned six gold medals all in world record times. Her victories were in the 100 breaststroke, 200 individual medley, 50 freestyle, 100 freestyle, the 4X50 freestyle relay and the 4X50 medley relay.

The world mark in the S10 disability category for the 100 breaststroke set in Sydney still stands today and she also currently holds the 200 breaststroke world record set in 1999.

Another career highlight for Sloan, who was born without a left hand, was being named the Canadian junior athlete of the year at the Canadian Sport Awards, one of the rare athletes with a disability to win the prize. That year she competed at the world championships and took eight gold medals.

Sloan retired from competitive swimming shortly after the Sydney Paralympics after a three-year career on the national team. The Calgary native wanted to pursue her studies and determine her future professional career goals.

She graduated from the Alberta College of Arts and four years ago moved to Toronto to manage the One restaurant. She is also pursuing her Sommelier Certificate in the food and wine industry.

Now 28, Sloan says her success in swimming gave her confidence she could achieve her goals. She is also pleased to see the Paralympic movement receive increased exposure and sponsorships over the last few years.