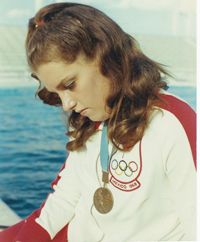 Marilyn Corson says it was luck that put her on the Olympic podium. Her parents always told her it was all her hard work that paid off. However in
the end, it was a story of an athlete who capitalized on a golden opportunity and delivered the best performances of her life when it counted the most.

At the 1968 Olympics in Mexico City, only two Canadian swimmers, Marion Lay and Angela Coughlan had met the time standard to race in the 4X100 freestyle
relay at the Games. Elaine Tanner, Canada’s top international swimmer at the time, was selected for the third spot. The fourth spot came down to a swim-off between Corson, a butterfly specialist, and Jeanne Warren a couple of days before the Olympic race.

Corson upset Warren in the swim-off and teamed up with Lay, Coughlan and Tanner in the 4X100 freestyle relay. The Canadian foursome won the bronze medal bettering their preliminaries time by seven seconds. Corson improved on her personal best by three seconds and Lay posted the fastest time of any of the relay swimmers in the final.

The foursome never raced together again.

Corson says that the fact that she wound up on that relay in the first place was a surprise to her. Currently residing in Savannah, Georgia, she adds that her parents, who were swimming coaches, always said that if you are prepared and ready a situation may come up because of all the work she did beforehand to get there. And she always swam better at the bigger meets. Still she was in awe, very happy but still felt luck had a lot to do with me getting the bronze medal.

Following her swimming career, Corson went on to a successful career in interior design. Just a few years ago, she decided to pursue a PhD in
interior design at Virginia Tech, in order to become a full-time professor, and graduated in 2008. Today she is a professor of interior design at Savannah College of Art and Design.

The skills she learned from swimming are what helped her finish her PhD. In particular it was persistence and not giving up. When she presented her thesis her committee said she needed to rewrite her conclusions. After pouring everything she had into original thesis, she spent another summer revising the 348 page document. She said that she used that persistence she learned in the pool for that final effort to finish. But it turned out improve her work in the end.

Her dissertation Interior Design and Licensure (Italicize) was published and is available on Amazon.com

Corson comes from a formidable swimming family. Her grandfather was the swim coach at the University of Michigan and the U.S., Olympic coach in 1952. He was one of the first inductees into the International Swimming Hall of Fame. Her stepfather was the first executive director of the International Swimming Hall of Fame in 1965. Her mother and stepfather started the Ann Arbor Swim Club, one of the first female swim clubs in the U.S.

A native of Parry Sound, Ont., Corson also resided in London, Ont., Ann Arbor and Fort Lauderdale as a youngster.