“She’s a girl who maybe wasn’t blessed with the greatest talent in the world,” High Performance Centre – Ontario Head Coach Ben Titley says when asked to describe Michelle Toro as a swimmer.

Forgive her if she’s heard that one before.

“I was always told that, by multiple coaches,” Toro admits readily. “Oh Michelle, you’re not really built for swimming. Oh Michelle, you don’t have natural talent in the water.

“But I always sort of took that as an extra motivation and I made up for it in other ways. I took pride in my discipline and working hard.”

And as any good Game of Thrones fan knows, nothing someone says before the word “but” really counts.

“…but there was no stopping her,” says Drudge. “She was vicious in the water, relentless as a racer. She has a tremendous sense of drive I have not seen anyone before or since her have to that degree.”

“…but she was really world-class in her approach and her dedication to training,” Titley continues. “She had a hugely positive impact in those areas on all the athletes she came into contact with.”

Toro is retiring from competitive swimming as an Olympic medallist, one of several great accomplishments she achieved after the “but.” 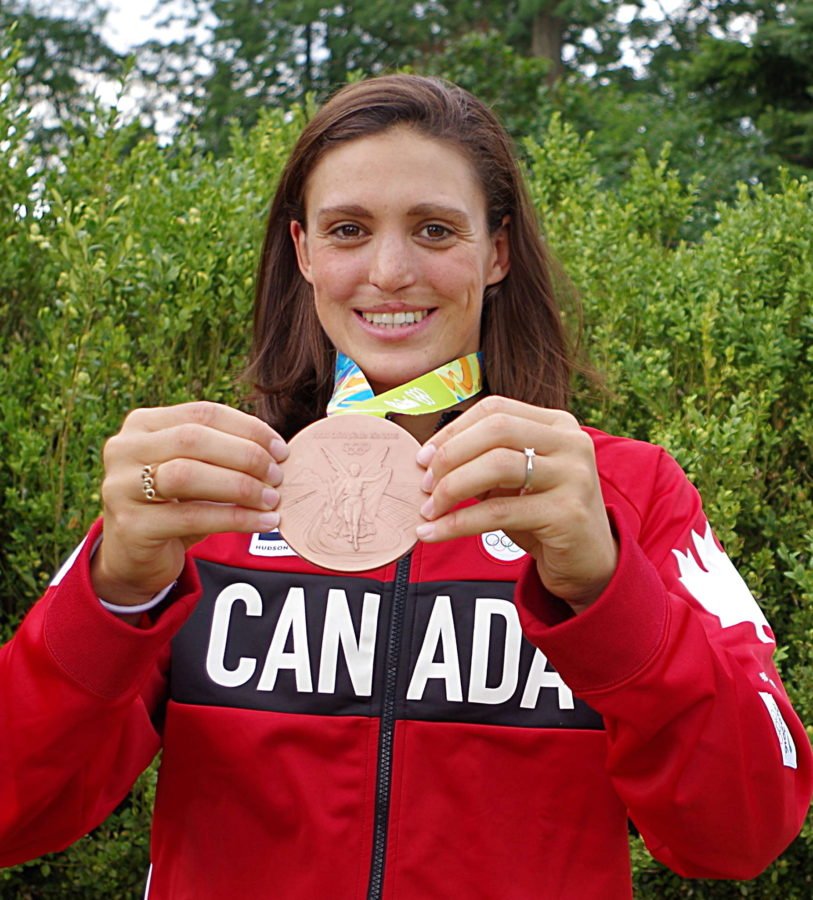 Toro (who competed as Michelle Williams before marrying NYAC coach Guillermo Toro in late 2016) was born in South Africa and her family moved to Toronto when she was six years old. She swam with the North York Aquatic Club, and at 19, attended the Ohio State University, where she earned a degree in exercise science.

In 2014 she was graduating at age 23, and in a world where teenage medallists are the norm, had never made a national team heading into that April’s Trials. She managed a fourth-place finish in the 100-m freestyle at 55.57, and Canada’s combined top four qualified as a relay for Commonwealth Games and Pan Pacific Championships.

“I think I made that team by 0.03 seconds, that was the add-up,” she recalls. “I was a so-much-later bloomer. I had to persevere a lot. I always just loved swimming so I never doubted.”

Toro joined Titley’s fledgling group, then based at the University of Toronto Varsity Pool. The HPC later moved to the brand-new Toronto Pan Am Sports Centre and added Sandrine Mainville, Chantal Van Landeghem and Penny Oleksiak to form the nucleus of Canada’s success at the Rio 2016 Olympic Games.

Toro’s contributions to that Olympic team were invaluable. By the time Rio rolled around she was consistently swimming 100 free in the 54-second range. Swimming third in the 4×100-m freestyle relay prelim on Day 1, she turned in a lifetime best split of 53.73. When 16-year-old Taylor Ruck followed in a blazing 53.04, Titley – also Olympic head coach and women’s relay coach – had a difficult decision on his hands. After resting Oleksiak in the morning, the plan was to insert her for that night’s final. Mainville, Van Landeghem, Toro and Oleksiak had been swimming and training together for months, but now Toro was asked to sit out the final.

“I think the biggest example that demonstrates what kind of teammate Michelle is, is how she handled the news that she wouldn’t be on the 4×100 freestyle relay for finals at the Rio Olympics,” says Van Landeghem, who recalls Toro as the “gentle voice of reason” in the HPC-ONT group.

“Rather than sulk or make us feel guilty, she uplifted us and made us feel confident that we could win a medal. I have an idea of the disappointment and disbelief that Michelle must have been feeling when she heard the news. All I can say is that it takes a really special person to accept it and at the same time prepare her teammates for the biggest race of their lives, all the while with grace and gratitude. For that, I will always be thankful to have had her as a teammate.”

“I found a spot under a staircase and let it out,” Toro says. “But after that I was like, OK, that’s all the time I get for feeling sorry for myself. Then I turned it around and consciously decided to be there for the team.”

Toro rode the bus from the Athletes’ Village to the pool with the four final swimmers, warmed up with them, and went to the ready room with them. When they earned a bronze medal that jump-started Canada’s Rio success, she was first to congratulate them.

“Nothing was different than if Michelle had swam in the final. That speaks to how she acted and how the rest of the team acted as well,” recalls Rio co-captain Martha McCabe, Toro’s former HPC teammate. “There’s no question that situation could have been handled completely differently. There could have been all sorts of problems, chaos, people not feeling good. I think our team as a whole, especially those relay girls, there was no question as to how that medal was earned. It was 100 per cent earned by all five of the girls who were on it. To me there was not even a story behind it because it was so normal.”

Encouraged by Titley, Toro’s actions were key in establishing the winning culture that manifested itself in five more medals in Rio, and has taken hold throughout Canadian swimming.

“In swimming it takes five or six people to win a medal in a relay, and (Ben) helped me realize that,” Toro says. “I was able to be there for the team and those girls and felt just as much a part of that win as they were. That’s encouraged with every relay prelim swimmer now, it’s been kind of the new normal for Canadian relays.”

Toro had a chance to share her story with younger NYAC swimmers at a recent club banquet.

“She spoke about the process she went through to get to the Olympics – not to mention a medal. Half the membership was in tears, I was in tears,” Drudge recalls. “When you see a success story when nobody figured that would happen, it is a testament to the tremendous drive of this young lady.

“That will be her legacy.”

Toro is thankful for all the coaches who believed she could do something special after the “but.” She calls Drudge “the first one to really believe in me,” and recalls a short speech Ohio State Head Coach Bill Dorenkott gave at her senior banquet.

“He said, ‘All I have to say is six words: The best is yet to come.’ That was really powerful just thinking back on that.”

“For me she was a great team member who showed perseverance throughout her career,” says Swimming Canada High Performance Director John Atkinson. “She represented her country with class, and mentored the younger girls coming through onto the national team. It did not go unnoticed.”

As a child Toro received multiple procedures and ongoing treatment for her cleft lip and palate at Toronto’s SickKids Hospital. She returned in the fall of 2016 as Olympic teammates Oleksiak and Kylie Masse joined with Paralympic medallist Tess Routliffe to brighten children’s day with their medals from Rio.

She was back again a year later, this time as a University of Toronto nursing student. While she attempted to balance school and training for a few months, this new calling is drawing her to focus full-time on the next chapter of her life. On a modified high-intensity program focused on the 50 free, Toro didn’t have time for all the little things she was known for – the pre- and post-training routines that go unnoticed by all but a select few coaches and teammates. 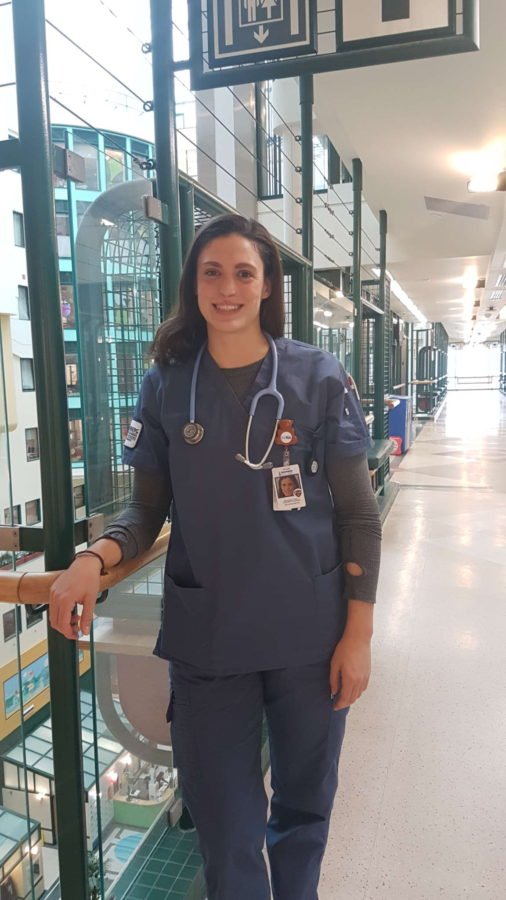 SickKids has been her favourite placement so far, but a post partum, labour and delivery placement at Scarborough General is a close second.

“My very first day I saw a birth. I was in the room and helping a woman deal with pain and everything. I got to see a C-section and a lot of the stuff the students do is stuff the registered nurses don’t have much time for, so I got to give baby baths all the time. It was a lot of fun,” she says.

If she pursues labour and delivery, she’d be following the path of 2012 Olympian Heather MacLean, who recently completed the U of T program.

“And she’ll always be a very important part of the success of women’s swimming in Canada.”