It’s arguably the most iconic photo from the Gwangju 2019 FINA World Championships.

Three of the world’s fastest swimmers stand side-by-side after receiving their medals in the women’s 100-m butterfly. They’re showing the cameras their hands, on which they’ve written encouraging messages to Japan’s Rikako Ikee, who was unable to compete due to her battle with leukemia.

On the left stands Australian veteran Emma McKeon, a four-time Olympic medallist. On the right, Sweden’s Sarah Sjostrom, three-time world champion and reigning Olympic champ in the distance. In between, with a gold medal shining around her neck and an almost stunned smile on her face, is a young woman who shocked them both – and most of the swimming world in the process – to become world champion.

For her performances in Gwangju, Margaret MacNeil of London, Ontario, is being named the first-ever recipient of Swimming Canada’s Breakout Swimmer of the Year Award. But how did she end up in the centre of that photo at 19 years old? 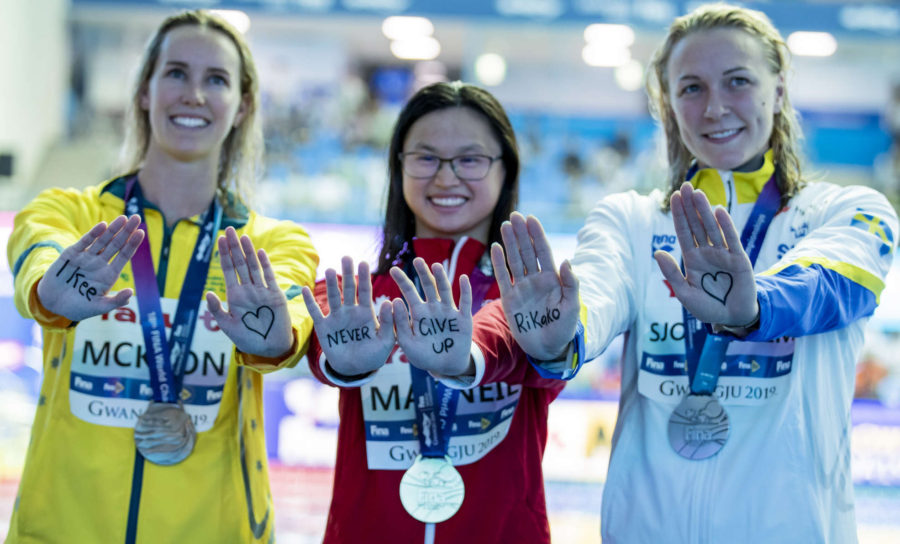 Exactly one year earlier, Canada was announcing its team for the Tokyo 2018 Pan Pacific Championships at the conclusion of the country’s Trials in Edmonton, Alberta. Thirty-five swimmers’ names were called out at the Kinsmen Sports Centre, home of the 1978 Commonwealth Games. MacNeil’s was not one of them.

Then 18, MacNeil had actually performed quite well at the meet, finishing fourth in the 100-m freestyle and second in the 100-m butterfly, and could have accepted her first ever senior national team spot. But a trip to Tokyo was slightly ahead of schedule for an 18-year-old whose meticulous planning and vision for her future might make a Fortune 500 CEO envious. Expecting to compete at the Junior Pan Pacific Championships and challenge for the senior team a year or two later, MacNeil was already taking classes in preparation for her freshman year at the University of Michigan. She declined the spot.

That decision has paid off so far. Although she had to delay her senior team debut by a year, she excelled at Junior Pan Pacs, and getting a head start on her studies has allowed her to take on a lighter school workload this year as she prepares to qualify for a 2020 trip to Japan via the Olympic Games in Tokyo.

“She attended all camps she was invited to and was proud to be a part of any Swimming Canada initiative she attended,” Swimming Canada National Development Coach Ken McKinnon says. “Maggie was always a positive addition to the team environment and a good teammate.”

MacNeil’s experience in the junior program also led to her battle with asthma coming to a head.

“…I couldn’t breathe and I left the meet early.”

“At a World Cup in Singapore in 2017, it was so humid I couldn’t breathe,” she recalls. “I got home and … finally went to a respirologist and found out I have sports-induced asthma, which can be worse with chlorine exposure.”

As she was finding a way to overcome asthma, it inadvertently pushed her into a focus on shorter distances.

“At (Ontario) provincial (championships) in 2018, I swam the 200 fly and almost didn’t finish because I couldn’t breathe and I left the meet early,” says MacNeil, who worked with a specialist to find the right mix of medications.

“I’ve got what works for me now, and I’ve focused on sprinting and gotten better. I don’t see myself focusing on longer races again because sprinting is working out pretty well.”

By the time she got to her second Junior Pan Pacs in 2018, “Maggie was the de facto team leader in and out of the pool,” says McKinnon.

MacNeil won four medals at that elite international junior competition in Suva, Fiji – three in relays and gold in the 100-m fly.

Still, her 100-m fly time of 58.38 wasn’t among the top 100 in the world in 2018. A solid performance for a junior, sure, but hardly a blip on the global scale, let alone foreshadowing she would ascend to the top of the world podium in less than a year.

Outside a close circle of teammates, family, friends and supporters in Canadian swimming, no one knew who she was when she arrived in Ann Arbor to begin her first year at Michigan in earnest.

MacNeil would soon impress another group: her teammates at Michigan, both with her training tenacity and her personality.

“I was intimidated by her after the first week we had. I was like, ‘Oh my God, no one goes that fast mid-season, untapered.’ It was just crazy to me,” recalls Alexis Margett, a California native a year ahead of MacNeil who represented Bolivia at worlds.

Margett remembers her fellow butterflyer being quiet and keeping to herself in the early going. Midway through the season though, she first heard MacNeil break into her trademark laugh at the world’s busiest airport in Atlanta, Georgia.

Some swimmers were playing the card game spoons, where players pass cards rapidly as they try to collect four-of-a-kind. Once someone does, a mad grab ensues to snatch the spoons in the middle. Only they had substituted fork/spoon hybrids.

“We were using ‘sporks’ and when I went to grab it I accidentally stabbed myself with it. Maggie started laughing and the whole airport echoed,” Margett says. “Everyone stopped what they were doing and stared at us, like, ‘Oh my God is that coming from her?’ It was the first time I heard her laugh. I found it hilarious, then I couldn’t stop laughing until I started crying, which made her laugh more. It was probably like a solid eight-minute laugh. I was like, ‘How are you breathing?’ She inhales the whole time. I’m going to start calling her Canada Goose.” 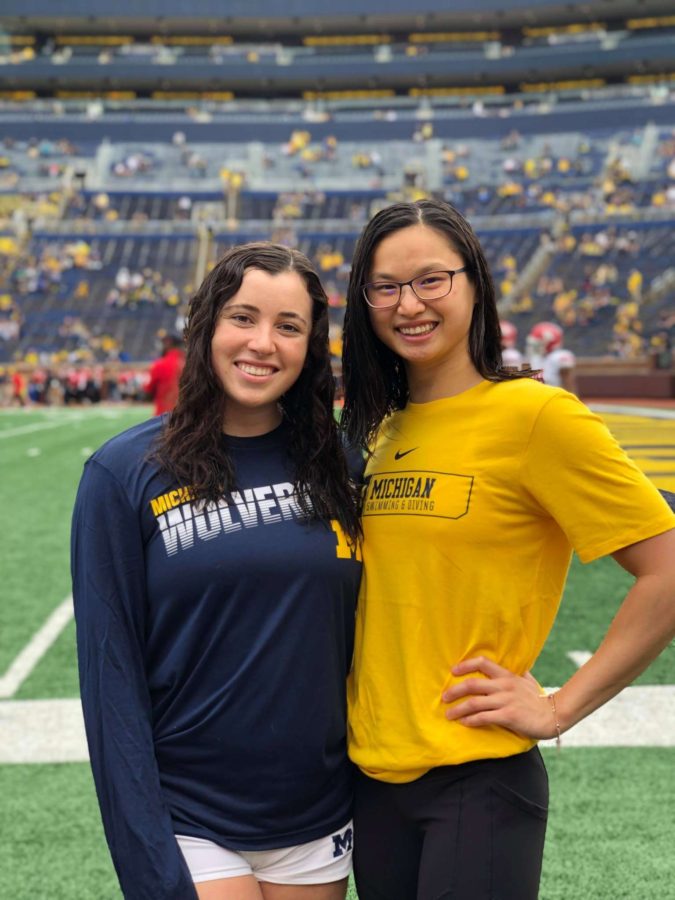 Throughout the 2018-19 season, the pair became close friends.

“In practice we goof around and try to make practice as much fun as possible,” Margett says. “She’s the type of person who pushes you through the workout even though it’s really hard.”

MacNeil felt her program at the London Aquatic Club with coach Andrew Craven had given her a great base. She credits increased weight training and overall fit with Mike Bottom’s program at Michigan with helping her take the next step.

“We do tons of power, focus more on underwater kicking, and a bunch of stuff dedicated to what I swim,” MacNeil says.

MacNeil turned that hard work into four Big Ten titles, helping Michigan to a second-place finish overall in the conference and earning Freshman of the Year honours in the process. At the national collegiate championships, she went on to finish second in the 100-yard butterfly behind Swede Louise Hansson of the University of Southern California.

By the time Canadian Trials rolled around in April 2019, MacNeil lowered her long-course best time in the 100 fly to 57.04 to win her first senior national championship. This time there was no question she would receive – and accept – a front-door invitation to represent Team Canada at world championships. 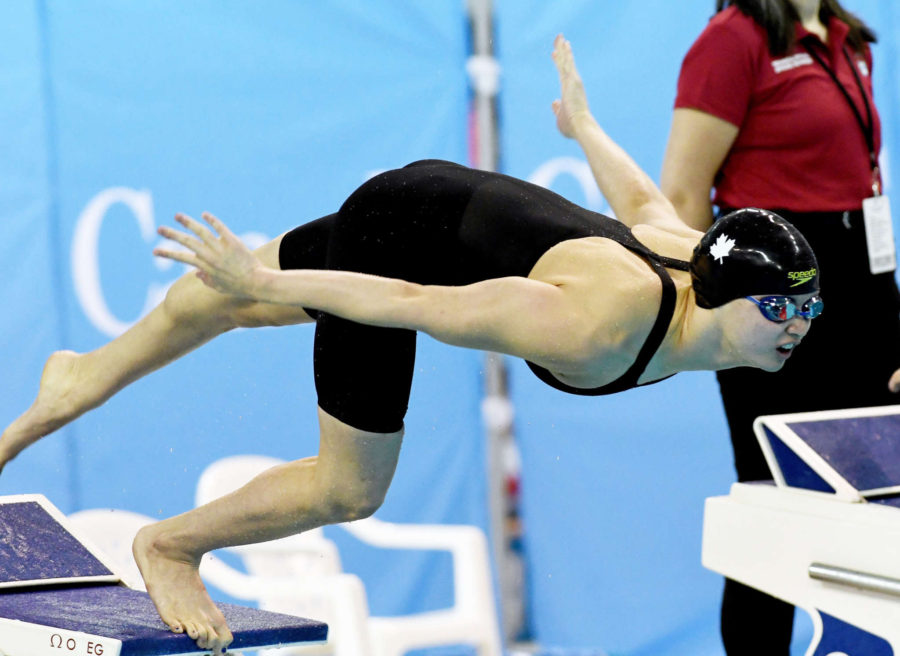 Despite knowing how hard MacNeil had been training and how much faster she was getting, even those closest to her weren’t necessarily betting on her unseating powerhouse Sarah Sjostrom at worlds. The Swedish great had won the last four best-on-best titles in the distance since 2013: three straight world championships and an Olympic Games.

“It’s a fight for second place.”

“She swims fast in practice, so I knew she was going to go fast. But I guess going against a (four-time) champion, pretty much people think they’re invincible. Nobody really expected that to happen,” Margett says.

“It’s a fight for second place.”

In Gwangju, Sjostrom was the fastest swimmer in the semifinals to earn top seed and Lane 4. In Lane 5 was MacNeil, seven years Sjostrom’s junior. The self-described “biggest swim nerd ever” had been “fangirling” about just being in the same meet as one of her exemplars.

“Zero per cent of me thought that was possible,” MacNeil recalls. “I just thought it would be cool to get a medal at that point. Gold was never in the cards. I don’t want to say I counted it out, but I never thought I was going to (win.)”

Sjostrom went out in a blistering 25.96 over the first 50 metres, 0.81 seconds ahead of MacNeil, who was fifth at the turn. But MacNeil made up some ground with her great underwater work, and by the final 15 metres began to push Sjostrom. On her final two strokes, the teenager clearly out-reached the legend, finishing in 55.83, a Commonwealth and Americas record comfortably ahead of Sjostrom’s 56.22.

?? Maggie MacNeil TURNS ON THE JETS and defeats reigning champ and world-record holder Sarah Sjostrom of ?? in the 100m butterfly to win gold

“It’s still crazy to think about,” says MacNeil, now settled into her sophomore year at Michigan.

Some university athletes will take a “red-shirt” year off of competition in order to prepare for the Olympic Games. MacNeil decided to return to what worked for her last year. And remember that decision to decline a national team spot and complete some credits early in 2018? That foresight at 18 has allowed her to lighten her course load and put more focus on swimming in this all-important year.

“I am a super organized person. I kind of like to know what I want to do and be able to plan for the future,” says MacNeil, who plans to pursue law or medicine after completing her undergraduate degree. “I was (tempted to go to 2018 Pan Pacs) but it worked out for the best.”

She says not much has changed about her life on campus, but as an unknown freshman she wasn’t being honoured at Michigan’s Big House, home to one of American football’s largest crowds. Swimmers don’t usually get the accolades at the famous football school that produced six-time Super Bowl champion Tom Brady and nine Pro Football Hall of Famers. But MacNeil had her day on the field this fall with teammate Felix Aubock, an Austrian distance swimmer, and two gymnasts, all of whom won national collegiate titles.

“They parade you out on the field and play a video celebrating our wins in front of 111,000 people. That’s definitely the craziest thing that’s happened. It’s so loud and the marching band is incredible, that’s my favourite part,” says MacNeil, herself a talented musician who played violin and clarinet before focusing more seriously on swimming. “We got to be on the field and watch it from right there. It’s different from watching in the stands.

“And you have to be more careful that footballs don’t come at your head.”

When a NATIONAL CHAMPION and WORLD CHAMPION get honored at the field in front of 111,000+ people. @felixauboeck @mags_swims26 #GoBlue pic.twitter.com/gjbo1UccGN

MacNeil admits she gets recognized a bit more, maybe asked for an occasional photo, but insists things are mostly the same, other than the differences for any second-year student. Her friend Margett agrees.

“She’s actually really humble. She’s not one of those people who show it off. She mainly keeps it to herself and doesn’t express it verbally. But she shows how good she is in the water,” Margett says. “If anyone asks, ‘Hey can you tell me a little bit about yourself?’ she won’t go straight to ‘I’m a world champion.’ She’ll start with her roots.”

If anything, it’s friends like Margett who bring it up in a teasing way.

“I’ll use her being a world champion as motivation to tease her in the weight room or in the pool,” Margett says. “If she’s doing pull-ups I’ll tell her, ‘I think world champs should be doing more than that.’ Or, ‘Do you think Sarah Sjostrom is doing less than that? You’ve got to push yourself harder.’ ”

Although MacNeil’s Gwangju time gives her a leg up on selection for Canada’s Tokyo 2020 Olympic team, she’s not taking anything for granted with talented butterflyers like Rebecca Smith and Olympic silver medallist Penny Oleksiak also vying for spots and others knocking at the door.

“All my non-swimmer friends are like, ‘Oh my God, you’re going to the Olympics!’ and I’m like, ‘No.’

“I haven’t qualified yet.” 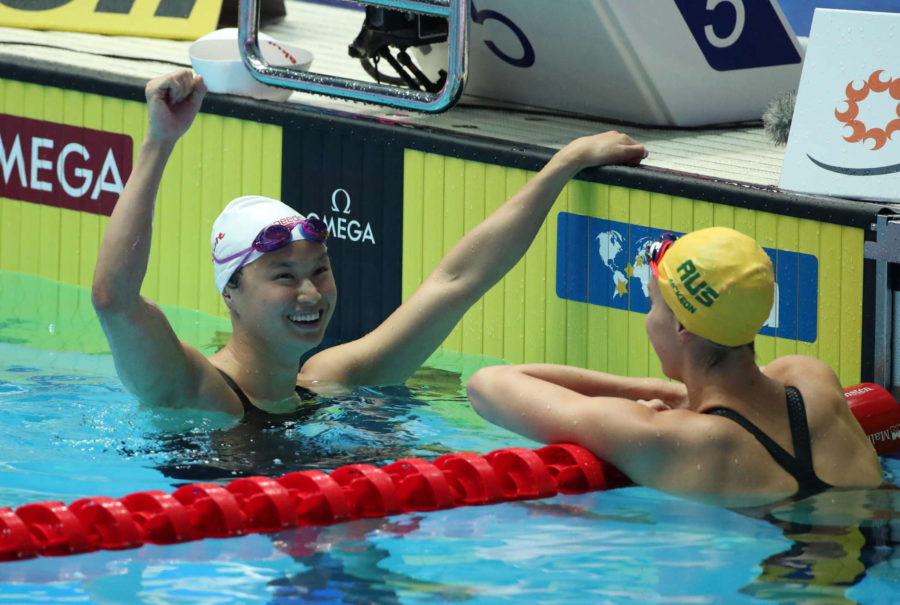