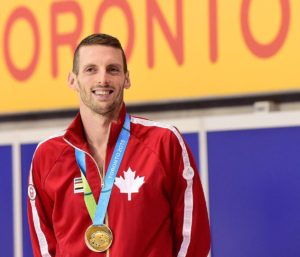 Ryan Cochrane left both an unfillable hole and an unmatched legacy when he retired from the national team in 2017 as Canada’s most decorated international swimmer. He won his first major medal in 2006, made his FINA World Championships debut in 2007, then stepped on the Olympic podium with bronze in his signature 1,500-metre freestyle at the Beijing 2008 Games.

That launched an eight-year run of medals at 12 straight major international championships, including silver at the London 2012 Olympics. His eight long-course world championship medals are the most all-time by a Canadian.

Cochrane’s ascendance couldn’t have come at a better time for Canada, which had been shut out in Athens 2004. He helped restore pride in Canadian swimming, and carried the torch to give a new generation hope that medals were possible. Although he finished out of the medals in Rio 2016, he was co-captain at his third Olympics, and many credited him with laying the foundation that inspired the young team to believe they could reach new heights.

“For years and years we’ve talked about winning. This team was here to win medals,” Cochrane said after making his third straight Olympic 1,500 final, in which he finished sixth. The previous year may have been his most impressive considering the circumstances. Cochrane earned gold in the 400-m and 1,500-m freestyle at the Toronto 2015 Pan Am Games, setting Games records in both. He went on to win his seventh and eighth world championship medals later that summer in Kazan, Russia, and earned Swimming Canada’s Male Swimmer of the Year award for the eighth straight time.  Those achievements are even more impressive considering the difficult year he and his teammates faced due to the death of High Performance Centre – Victoria coach Randy Bennett.

“Representing Canada at the Pan Am Games as well as the world championships was incredible and I’m thankful to have had the opportunity to stand on the podium multiple times,” Cochrane said. “We went right back to work after Randy passed away because that’s what he’d want us to do. I think we did everything possible to be the best athletes we could be in the water. We really pushed ourselves but that being said the emotional toll at the end of the year was tough.”

Bennett once described Cochrane’s incredible consistency as “like clockwork” and he had continued it with Bennett’s coaching successor Ryan Mallette. In addition to thanking both coaches when announcing his retirement, Cochrane thanked his parents, teammates and supporters.

“I’m continuously grateful to have been able to represent Canada over the last 12 years,” Cochrane said. “It was a thrilling and humbling adventure that I had dreamed about for as long as I can remember. I always wanted to be an Olympian and it still seems unbelievable to me that I was able to realize that goal. No matter where in the world we were competing, I always felt thankful to be able to represent our nation, and always wanted to make Canadians proud.”