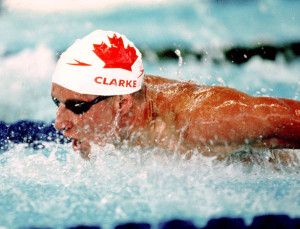 It was an example of leadership that influenced Stephen Clarke for the rest of his swimming career.

At 18 Clarke was a surprise winner of the 100-metre freestyle at the 1992 Olympic team trials. Some questioned if he was too young and inexperienced to anchor the 4×100-m medley relay at the Barcelona Games. Veteran butterfly specialist Marcel Gery helped calm Clarke’s nerves.

“He came up to me and said, ‘That’s your spot in the relay and you’re going to be to be great in it,’ ” Clarke recalls. “I do credit him with helping ease the transition onto the national team.“

Clarke, along with Mark Tewksbury, Jon Cleveland and Gery, won the medley bronze medal at Barcelona. Clarke remembered the confidence Gery instilled in him and tried to do the same for young swimmers on future national teams.

“You can see the younger swimmers are nervous,” he said. “Including them in the team, even telling stories of stuff you saw other guys do, I think it does help put people’s minds at ease.

“That’s the biggest thing I learned from swimming with some of those great swimmers.”

Clarke also won medals at two Pan Pacific Championships, a pair of Commonwealth Games, and a Pan American Games. He attended the University of Florida on an athletic scholarship and won two individual Southeastern Conference SEC championships, and was a member of five SEC championship relay teams.

Clarke still regards winning the 100-m freestyle at the 1992 trials as one of his proudest achievements.

Born in Sutton Coldfield, England, Clarke came to Canada at age four with his parents. He grew up in Brampton, Ont., and joined the COBRA swim club. While some swimmers left COBRA for larger clubs, Clarke stayed.

“It always seemed kind of backwards,” he said. “If I was getting faster and getting better each year, why switch?”

Prior to 1992 no CORBA swimmer had ever won a medal at the nationals or made a national team. Three busloads of parents and swimmers made the trip to Montreal to watch Clarke at the trials.

“I think that’s one of the things I am most proud of, establishing that you don’t need to leave to have success,” said Clarke. “You can have success right at your own club team.”

Besides being inducted into Swimming Canada’s Circle of Excellence, Clarke is also a member of the Brampton Sports Hall of Fame and the Ontario Aquatic Hall of Fame.