It’s a long way to travel for one race but Aurélie Rivard is looking forward to the challenge.

Rivard will swim the S10 200-metre individual medley at the Commonwealth Games at Gold Coast, Australia, which begin April 4. That’s a far cry from the workload Rivard shouldered at the 2016 Rio Paralympics where she won four medals, including three gold, and reached the final of five races. Counting relays, she participated in seven events.

“It’s a different preparation,” said Rivard. “To have all my energies focused on one race is something I never do.

“I put more pressure on that race because I tell myself you only have one shot for performance. Usually I have seven or eight (races). If I have one bad (race) I can bounce back somewhere else. It’s weird to deal with that.”

New Zealand’s Sophie Pascoe won the S10 200 IM in Rio. So far this year, three of the top six times in the event have been recorded by Australians.

Preparing for an event where she isn’t a favourite isn’t necessarily a bad thing, said Mike Thompson, head coach of the High Performance Centre – Quebec where Rivard trains in Montreal.

“She’s looking forward to the opportunity to race people that are generally ahead of her,” said Thompson. “I don’t think they are really considering her a threat, but I thinks she is considering herself a threat and she is a great racer.”

Rivard generally swims her best at the end of the season. Preparing for an international meet this early in the year has changed her training, said Thompson.

“If she was going in knowing she could win I think it would be a little bit of a different attitude,” he said. “She wants to try to win. It’s pushing her a little bit more.

“She’s had a good eye on what she’s been doing and training. She is very analytical of what she feels she needs.” 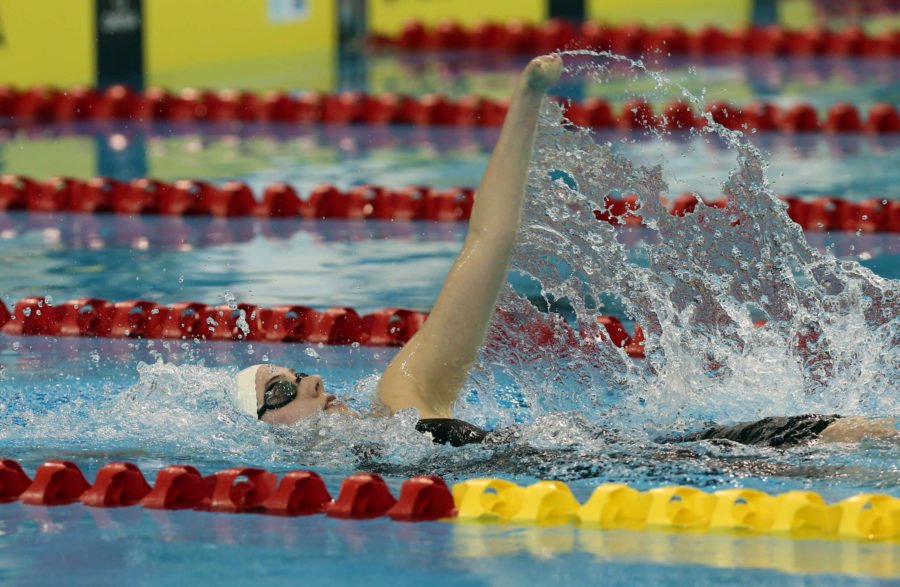 One of the things unique to the Commonwealth Games is Olympic and Paralympic athletes compete together. It’s a rare chance for members of Canada’s able-bodied and Para-swimming team to meet and mingle.

“We’re from the same country, we’re doing the same sport, but we don’t really know each other,” said Rivard. “It’s nice to be together.”

Rivard set four Canadian records and two world records at the Rio Paralympics. She also was selected as the Canadian flagbearer for the closing ceremonies.

Her performance came on the heels of then 16-year-old Penny Oleksiak winning four medals, including a gold in the 100-m freestyle, at the Rio Olympics. Oleksiak, the first Canadian summer Olympian to win four medals at a single Games, also was a flagbearer for the closing ceremonies.

“The question I get asked the most by people is if I’m friends with Penny,” said Rivard. “People just assume we know each other really well.
“We don’t so the same things. I wish we could meet up more than once every four years.”

There have been several changes in Rivard’s life since Rio.

The 21-year-old native of St-Jean-sur-Richelieu, Que., purchased a condo in Montreal. She also switched from long-time coach France Latendresse to train with Benoit Lebrun before joining Thompson at the high-performance centre last November.

“I was a bit nervous about the transition,” she said. “I changed coaches twice in a year. I’m not used to that.

“I was wondering how it would go but it’s been going well.”

Moving to the centre has put Rivard in the same pool as fellow national team swimmers Tess Routliffe, a silver medallist in Rio, Samantha Ryan, Jean-Michel Lavalliere and Zach Zona. Those five are among the 11 Para-swimmers on the Commonwealth Games team. To improve her speed and technique, Rivard spends part of her time training with male swimmer James Leroux and Zona.

Competing in Australia will also help Rivard erase some of last fall’s frustration.

Members of the national para-swimming team spent time attending training camps in Flagstaff, Ariz., and Santa Fe, N.M., preparing for the World Para Swimming Championships in Mexico City. When the event was postponed due to a devastating earthquake, Swimming Canada organized the Canadian Open held at the Toronto Pan Am Sports Centre.

“We were two months at altitude away from our lives,” said Rivard. “To do all that buildup and all that training. The last week we spent there was really tough.

Thompson doubts Rivard will have any trouble being motivated for the Commonwealth Games.

“She doesn’t like not to win things,” he said. “She likes to beat people.”