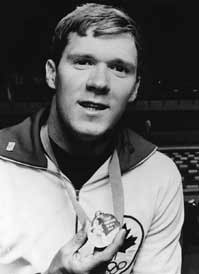 It is hard to believe that Ralph Hutton, one of Canada’s most consistently successful international swimmers, grew up and trained at a little coastal community called Ocean Falls which was isolated from the rest of the world by mountains and water, 500 kilometres north of Vancouver.

‘’There are probably 40 residents there now,’’ said Hutton, the first Canadian to win an Olympic medal in 48 years when he took silver in the 400 freestyle at the Mexico City Games. ‘’Back in the Sixties we were a group of about 120 swimmers in an area of 3,000 people.’’

The club was led by George Gate, a British-born mill worker who went on to a Hall of Fame coaching career first in B.C., then to Pointe-Claire, Que. Ocean Falls incredibly produced at least one Olympic swimmer from 1948 to 1976. Another significant athlete besides Hutton was Dick Pound who would eventually become a vice president with the International Olympic Committee.

Hutton was Canada’s male swimming superstar in the 1960’s. The highlight was the 1968 season capped by the Olympic medal. But heading into the Games, he was a strong medal contender after breaking the world record in the 400 freestyle two months earlier at the U.S., nationals. His 4:06.5 mark was not threatened at the Games.

His first big international impact was at age 18 at the 1966 Commonwealth Games. In Jamaica, Hutton collected eight medals including gold in the medley relay and broke seven Canadian records. Including heats, he races 15 times in eight days and a Vancouver journalist coined him Canada’s Ironman in swimming. He would lower six more national records a year later at the Winnipeg Pan Am Games.

When Hutton stepped on the starter’s block at the 1963 Pan Am Games, he was a boy among men, but the 15-year-old still delivered a double medal performance. A year later, he swam more individual events in the Olympics than any Canadian swimmer before or after the Tokyo Games.

He would compete at two more Pan American Games, two Commonwealth Games and capped his career at the 1972 Munich Olympics.

Hutton was named Canada’s outstanding male swimmer in 1966, 1967, and 1968. He was the first Canadian swimmer named to three consecutive Olympic teams and the first to make the finals in three straight Games. Hutton won 24 medals in international competition and during his remarkable career made the finals in every international meet he entered, failing to win a medal only twice in those finals.

‘’I was fortunate to be involved in some really good programs,’’ said Hutton, now enjoying retirement at age 63. ‘’They were really innovative and I enjoyed being in the water all the time. The 1966 Commonwealth Games, were a big moment for sure because I found out how successful I could be. When I won that Olympic medal, I couldn’t believe it.’’

After initially coaching in his post career, Hutton went on to a distinguished 27-year career with the Vancouver Police Department. He remained actively involved in swimming throughout his post competitive life including coaching appointments at UBC and West Vancouver.