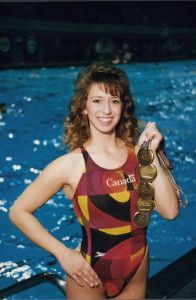 In a career full of achievements Joanne Mucz Vergara saved the best for last.

Swimming at the 1992 Paralympic Games in Barcelona, Spain, the Winnipeg native won five gold medals and set five world records. She capped her last major competition by being chosen Canada’s flag-bearer for the closing ceremonies.

“I would refer to that as the pinnacle of my career,” said Mucz Vergara. “My accomplishments went beyond my own expectations.”

Mucz Vergara, a bilateral below-the-knee amputee, began swimming at the age of three. Her competitive fires were stoked by athletic brothers who were involved in sports. Being in the water levelled the playing field for her.

“Swimming allows you to use what you do have,” she said. “My upper body could compensate for the fact I was lacking on the legs.”

At nine years old Joanne joined the Manta Swim Club. She first made an international splash by winning three gold, a silver and two bronze medals at the 1986 World Championships for the Disabled in Gothenburg, Sweden. The next year she won six gold and the award for Outstanding Performance at the second International Games for the Disabled in Paris.

At the 1988 Paralympics in Seoul, Korea, Mucz Vergara won gold, silver and bronze plus set a world record. That set the stage for Barcelona.

“There was a lot of time, a lot of workouts, a lot of effort that went toward those Games,” she said. “I was very driven about it. To be able to peak, to do your best performances in as many races as I did at one competition, I was so over the moon with what I had accomplished.

“It was a beautiful experience, a beautiful Games. In my own heart it felt like a great accomplishment that I am always proud of.”

“Swimming helped define me as the person I am today,” she said. “The competitive spirit I put toward swimming just got transferred to different areas of my life once I decided to move on from the sport.”

Mucz Vergara is happy with the increased awareness of Paralympic sports.

“For the era I was swimming in, I feel like a lot of us were pioneers,” she said. “I’m very pleased to see how much Paralympic sports have grown. There is very little differentiation now. There is much more in the way of integration. Everything is on the right track.”

Mucz Vergara, married Hector Vergara in 2001 and has three children.